Jordan– Bears, bears, bears, Muzzy Bearr, GRIZ. We have lots of bears. Where did your name come from?

Muzzy Bearr– Well, I was driving back from my first gig with GRIZ which I  played guitar for him. He kept introducing me saying, this is Dan Hacker on guitar. Make some noise for Dan Hacker on Guitar. Man my name is corny. It sounds corny on the mic. So I asked him, is this the last time we are going to do this or what’s up? He said, its not if you don’t want it to be the last time. So I needed a name. So we started brainstorming.

Jordan– A man with branding in mind right off the bat.

Muzzy Bearr– Well I don’t know. I just felt GRIZ and Dan Hacker sounded out of place. We were driving and trying to get into the mindset of things. Started thinking about bears because I always felt a connection. Spiritual animal type $hit. That character from the 90’s that taught everyone French and Spanish named Muzzy. Kind of looked like a bear, resembled a bear. So I associated that. Muzzy was born. Then we found out another guy was named Muzzy so it became Muzzy Bearr.

Muzzy Bearr– So we just dropped a record mid April. Called Vintage Sutra. Got features with GRIZ, Exmag, Branx, all good records , low temp music homies. Got the Homie Denmark Vessey rapping a verse, he is a Detroit/Chicago cat that came out.

Just got off tour with GRIZ. It was amazing! Getting geared up for the festival season trying to write some new music for the next record. As well as live edits, remixed type stuff. Sending songs back out with friends I worked with before. Trying to make some new project with them.

Muzzy Bearr– Well there is a super top-secret idea I have in mind for the future, which incorporates a couple other musicians in the group. But I am not going to go more into detail about at this time.

Jordan– So we can expect more friends

Muzzy Bearr– You can expect friends. That’s a goal trying to get out by the end of the year involving that project. And then working with Exmag again. I showed them some sessions when we were on tour that they were vibing with. I believe we can get new stuff in the works. Trying to get more beats out to rappers get into that vein too.

Jordan– All right. We are talking guitars, were talking amps, were talking gear. You yourself being a music man. What kind of stuff are you working with? What’s the gear setup look like? Is it something that is changing? Is there a set standard?

Muzzy Bearr– I have been rocking the same setup for a long time. It’s just my guitar in through Ableton with all the tracks. I essentially just using the guitar amp programs within Ableton to make it sound like a guitar amp. So I don’t have to lug one around with me. Which is pretty convenient. Something I like about playing from a computer.

Jordan– What is the tried tested guitar you carry with you.

Muzzy Bearr– I rock Gibson midtown custom. It has bigsby whammy on it. In use to be a fender strat guy till someone in Detroit wanted it more then me. They barrowed it for permanent. I got the Gibson and I haven’t looked back. It has been treating me well. My lady Stella.

Jordan– Have you been living on that guitar? How much have you been reaching out on the Beat game and the rest of that?

Muzzy Bearr– I defiantly have been focusing on the beat making a lot because that’s the newest skill set I need to develop. There is an endless amount of stuff. Same goes with guitar. I try keeping the balance 50%/50% on both. Keep improving on both while still keeping to myself.

Jordan– So all of those beats are in Ableton.

Muzzy Bearr– All is in Ableton.

Muzzy Bearr– RIP the majestic Theatre. RIP the Majestic Theatre. I miss that and the magic stick. Those were my spots. I mean Movement, Hart Plaza weekend is the best weekend to be a Detroiter

Jordan– Lets get into your work and Griz tracks. What is your favorite track that you were involved with? Favorite Groove.

Muzzy Bearr– Hmm. Hmm. There was this song for the last record “Rebel Era – keep the dream alive” Which is a personal favorite because I got to sing on it, and write some of the guitar parts, write the lyrics and sing those. We’ve been playing it out live lately. Which has been really neat. Because I’m not use to singing in front of people. So it kinda nice. It defiantly a change I am trying to incorporate it more and more. Working with Grant, Griz is always a treat. Every song is special to me for its own reason. Keep the dream alive. Another song, “Dance with me” we made it a super long time ago, which keeps coming back in different iterations. It’s a big staple in the live show. It’s always nice to see that.

I kind of hate all my own tracks. I can’t pick a favorite. I love them but I also love to hate them. So I don’t have a favorite.

Jordan– It’s a Dj’s world right now. Stuff goes out. You obviously have a unique live performance of yourself and the various people you work with. As long as working with other Dj’s tracks that have taken off that you have seen other people take and remix and use any favorites from those.

Muzzy Bearr– There’s this dude Kaytranada everything he puts out whether it’s original or remix or anything. He knows what’s up. I’m a big fan of his.

Jordan– Where is he out of?

Muzzy Bearr– Think he’s is a Canadian cat from Toronto. A Toronto boy. If I’m not mistaken.

Muzzy Bearr– Shout out Toronto. And there is this cat High Klassified from Montréal that’s just killing it. I have been big into the Canadian beat scene that’s been coming out. There are a lot of Toronto & Montréal cats. There is this dude Louie futon that’s out of Pennsylvania, which is really awesome. Lindsey Lowend and Jonah baseball are really hot now. There is a lot. I am always taking in new influences. Whenever someone shows me something new. I am giving it open ears and usually like something about it

Jordan– We have to ask all artists this. All musicians self included. What have you been listening to lately? What’s hanging out in the car, what’s in the 8 tracks, what’s on your iTunes playlist, what’s ringing on your phone, what stations are you listening to?

Muzzy Bearr– Well my ring tone is the Jurassic park theme song. So that’s always bumpin’. I really been loving the Alabama shakes most recent album. Really amazing. I have been listening to that a lot. There is this guy Saint Paul and the broken bones. Kinda a similar vibe. New retro sound that people are going for. Like mayor hawthorn. All that type of stuff.

Jordan– That awesome folk revival kicking in. I love those groups.

Muzzy Bearr– The classic coming back type stuff. That been a lot of bumpage. Revisiting a lot of old rock on tour white stripes stuff.

Jordan– Still letting the spirit of the city live on.

Muzzy Bearr– trying to contribute my own to that.

Jordan– We started out with bears. We are going to end with them. Goldie locks and the three bears. Which one do you most identify with? Too hott, too cold, just right?

Muzzy Bearr– Just right. I’m a just right guy. I like everything to be balanced. I’m a Libra so everything has to be even keeled. So I’m middle bear whatever that is. Middle bear, Muzzy Bearr. Everything just right. Can’t have that porage too hot! LOL 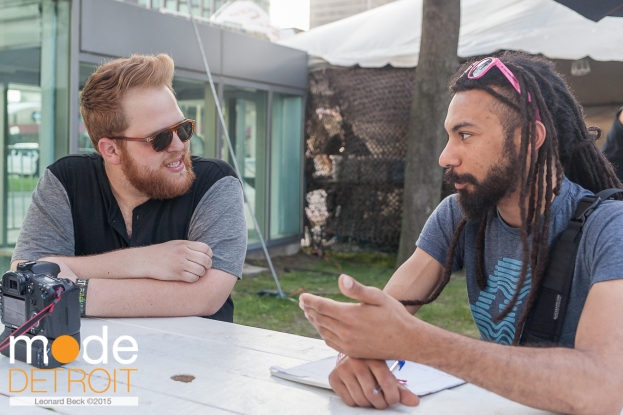 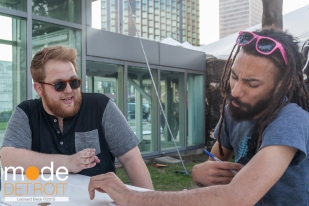 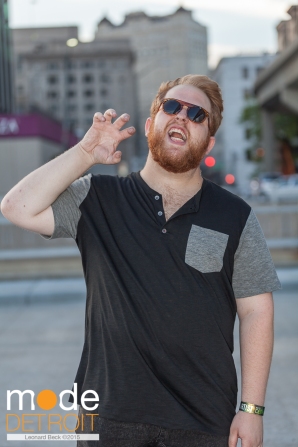 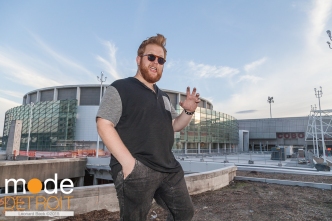 Photos from the All Good Records After Party– https://modedetroit.com/2015/06/21/allgood/

One thought on “Muzzy Bearr: Interview”